Game will be at the Fortress in Obetz Friday night at 7pm.
Ready had a big win against Genoa last week getting revenge for last years loss and WJ thumped Lockland.
Thoughts?

I think this is going to be a very close highly competitive game. I fully expect both of these teams to be playing come Week 11. Big points for the winner. My prediction: Ready 31, West Jeff 20

This will be the 5th meeting between West Jefferson & Bishop Ready with Ready holding a 3-1 edge:

WJ-OSU-STEELERS said:
This will be the 5th meeting between West Jefferson & Bishop Ready with Ready holding a 3-1 edge:

Both teams are ranked in the Yappi Div V poll, #8 WJ and #6 Ready. In wk1 West Jeff beat Div VII Lockland 53-7 and Ready traveled to Genoa Area and won 24-7 vs a team that made the playoffs last year.
Click to expand...

Thanks for the history recap. I was at the last three games and look forward to the game this Friday as well. Readys upset of West Jeff last year was easily the highlight of a very poor season for the Knights. Not to be disrespectful but curious what broke down for the Riders in that game as they went on to have a rather successful season.

ReadyKnightsFan said:
Thanks for the history recap. I was at the last three games and look forward to the game this Friday as well. Readys upset of West Jeff last year was easily the highlight of a very poor season for the Knights. Not to be disrespectful but curious what broke down for the Riders in that game as they went on to have a rather successful season.
Click to expand...

WJ really struggled to find their offense during the 1st part of the year, especially their passing game. Really unusual for WJ under Coach B as they are typically wide open with good mix of run/pass. They obviously found their rhythm during the later part of the season. We will see if they can answer the call this week. I just love these types of games as opposed to last week.

Last year Ready went to West Jeff and took it to the Roughriders - they were simply the better team and earned the w. I think the Ready loss last year got the attention of WJ and they were able to rally and have a successful season. Hopefully West Jeff had a good week of practice and will show up tonight mentally ready to play, it will take 4 quarters of solid football to have a chance at a w. I believe this is the last game in this series but with Cutler back at Ready and Buescher at WJ, I would not be surprised if these two teams didn't square off vs one anther in future years in the playoffs. Good luck to both teams tonight & go WJ!
R

Last year, West Jeff simply could not stop the run against Ready, Period!
And for West Jeff on offense like above the riders just did not have a passing game at that time.
Last week, WJ’s Starters only played one 1/2 of football and that didn’t help anything going into this game.
Ready played A much better team in Genoa.
This season, it looks to me that Ready is a much better team than last year running and throwing the ball and even on defense.
West Jeff is a better team as well running the ball and much better at the quarterback position.
The defense will need to step up for WJ and make tackles at the line of scrimmage.
Both teams look explosive and are able to score on any single play so I look for a very good game and could be a high-scoring game.
Last week West Jeff missed several extra points so hopefully they will get that figured out because that Will be the difference in a close game.

Its Friday and game day 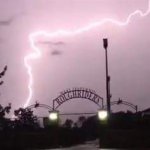 ...that, didn’t look like a TD. I don’t think the ball broke the goal-line (saw it from the corner of the end zone.) Ready came up with it. Oh well; good game.

It appears that both West Jeff and Ready’s bands put their talents together and are performing Rosanna by Toto. Awesome job!
R

West Jeff’s o-line just DOMINATING the line of scrimmage. Ready isn’t shooting the gaps too well and WJ’s backs are unreal. Agreed that Ready’s defense doesn’t look too hot but WJ just looks like a train.

Eager to see what Cutler has drawn up for the second half. Wouldn’t want to be in that locker room right now.

West Jeff did a great job of setting the edge in the first half, just need to tighten up on pass coverage better.

Refs starting to help out now

I didn’t see the personal foul and the PI that shouldn’t have been was right in front of me. Same exact thing play happened in Lancaster-Watterson last week. Bailed out a poor throw into double coverage.
R

congrats on the win, good luck next week Ready

i never cared what Calpreps said over the last few years.
R