D-II State semi-final
Hebron Lakewood 1
Lagrange Keystone 1 Suspended top 2nd inning
Lakewood has a runner on second base no outs. Will be resumed tomorrow at 10am.
H

D-IV semi-final
Antwerp 1
Peebles 0 final
A lead off homerun by Brumett sends Antwerp to their first state final. Madison Pierce of Peebles ties a D-IV record of strike outs in a game with 15.
H

Champion didn't give up a single run in the tournament with a sophomore pitcher. Incredible.

Lakota East 7
Louisville 6
Bottom of 6th with 2 outs when more threatening skies ended all chance of finishing the game. Louisville's Shae Thomas' homerun brought it to 7-6
in the top of the 6th, game will finish 12 Noon at Firestone Park, with 2 outs in the bottom of the 6th.
S

Louisville and EAST get back at it at noon 6/2.
Below is the radio link. Game will pick up with 3 outs to go for EAST as they bat in the bottom of the sixth with 2 outs and no runners on with a 7-6 lead.

Targeting said:
Champion didn't give up a single run in the tournament with a sophomore pitcher. Incredible.
Click to expand...

3 years in a row. 4 out of 5. 6 out of 9. Lost the Gatorade Ohio player of the year from last year’s team and never missed a beat.

Is that really the OHSAA picture? They forgot the 2 runs in the bottom of the 6th for Lakota East. 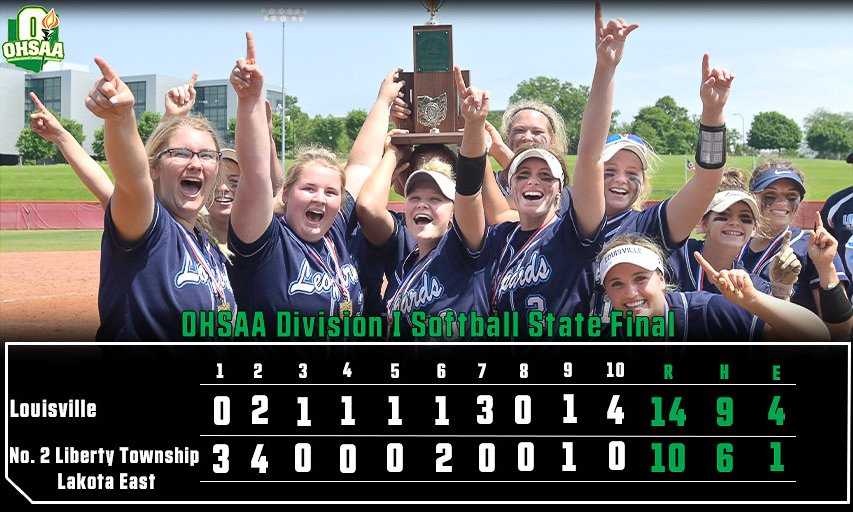 Congratulations to the Louisville Leopards! Once again, the Massillon D1 District winner proves to be the best in the state! Look out for the Lake Blue Streaks next season. They return most of their squad including their pitcher and catcher along with several of their top hitters.

Louisville had this player, the catcher, I think her name was Ollis, who epitomized what this game is about, or should be. On the field, she's fiery, very good, and the obvious emotional leader of the team. But it was off the field where I got the biggest kick out of her. During the rain delay, she held court with a bunch of younger kids. She sang with them, led them in a conga line throughout the stadium through the raindrops, and the kids had a ball. Those kids looked up to her and she embraced them. I know 17 year old girls are rarely role models, but she was to those kids, and she seemed so genuinely engaged with them. Then, during warm-ups the next day, she's in front of her dugout juggling softballs. She's playing for the state title, but she's having fun with the whole experience. She has the perfect perspective. In fact, I saw lots of that this weekend, and it was a good feeling to see these kids competing at a high level in their sport, but taking it all in and not letting it get too big for them, like Jonathan Alder's Cierra Clark doing the steps to the Cha Cha Slide in the on-deck circle in the 5th inning of a close state title game. It's stuff like that that makes me love high school sports.
You must log in or register to reply here.
Share:
Twitter Reddit Pinterest Tumblr Email Link
.
Top