Not sure I have any clue what is going on but appears a little crazy. Apparently, they let Shannon Sharpe go back to his seat after the altercation. I guess the NBA is trying to become a little more like professional wrestling... 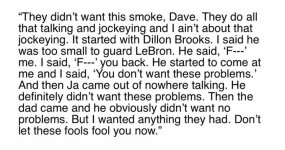 It's an absolute joke going both ways. First of all Shannon Sharpe is 54 years old, and he's jawing with guys who are more than half his age. Second, when NBA players jaw with fans, they deserve what ever they get. If you are going to do that, don't be asking security to take people out of the arena. You started it.
Now let's look at security and the Lakers. If it's joe public , he's whisked out of the arena and never returns. The point that Sharpe was allowed to return just show the entitlement that goes on, especially in LA.
Update/ Sharpe walked it back with a heartfelt apology yesterday leading off his Undisputed show, which he should. My guess is someone above him at Fox told him he will apologize and not put Fox in that position again. These TV networks/ personalities and pro sports leagues are all in bed together and laughing their way to the bank, fleecing the American public who pays to watch these guys.
You must log in or register to reply here.
Share:
Twitter Reddit Pinterest Tumblr Email Share Link
.
Top