Isaac Watts said:
This has been a great game over the last five years. If I recall, Perry’s 2014 team drove the ball up and down the field on that Hudson team that had the killer defense and the stud quarterback... mr football, can’t remember his name. Perry hung with them for about 3 quarters. But Perry couldn't punch it in and then the dam broke and Hudson took over.

If Hudson’s defense isn’t all that good, then I don’t see a way for them to stop Perry and when Perry can’t be stopped they usually win the game.
Click to expand...

- '14 Hudson fiddled around a little considering they had Igantius, Mentor, and Eds in weeks 12, 13, and 14. The 2 pt play game that provided Perry motivation the for '15 game.

- '15 the "hair gel" game was a blood bath. A great football game. Both teams had around 200 yds of offense and averaged 3 yards per rush. Perry of all things hit 2 big passes, playing on Hudson's aggressiveness, that was the difference in the game. Both teams had stud O-lines and Perry had Sims. Every play was a fight.

Hudson is young and getting better all the time the QB is special. No idea how this game ends up but won't be surprised by anything.
P

Looking forward to watching this matchup. I feel Perry’s D has looked much better the second half. Hudson looks to be a very tricky match up their qb and run game. See who can slow the others run game down the best. Go Perry!
L

I keep going back to Hudson's pace. They play really fast and that opens running lanes. They have decent size up front, but to me it is the pace that gives opposing defenses a hard time. If Perry can deal with Hudson's pace, I think they win the game.
S

Lep2002 said:
I keep going back to Hudson's pace. They play really fast and that opens running lanes. They have decent size up front, but to me it is the pace that gives opposing defenses a hard time. If Perry can deal with Hudson's pace, I think they win the game.
Click to expand...

After watching our defense against McKinley, I would say i am very concerned with a fast pace offense.

Region2 said:
Perry of all things hit 2 big passes, playing on Hudson's aggressiveness, that was the difference in the game.
Click to expand... 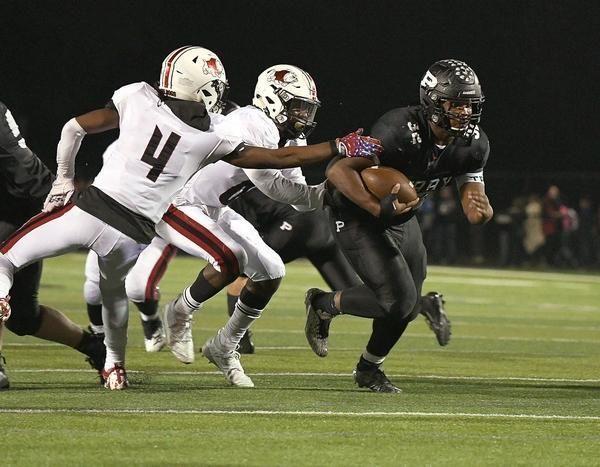 PERRY TWP. The question made Hudson coach Jeff Gough chuckle. Of course, part of that was because of a certain kernel of truth behind the query.

Gonna be a first class tighten the chinstrap game...
P

Good luck to Perry from a Tiger fan. Hope we can meet up next week.

Go Perry....hang on to the ball, secure the win.
L

'That's what this is about': Perry responds to loss with focus, effort 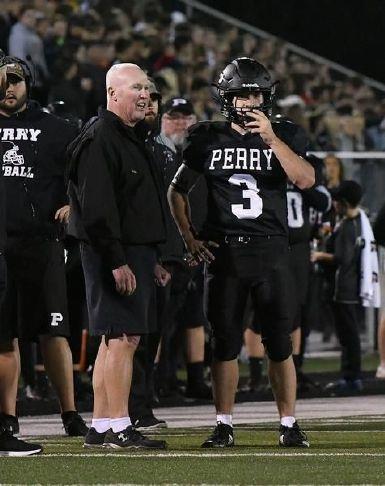 'That's what this is about': Perry responds to loss with focus, effort

I see Perry grinding this one out as they've done the last couple of times they've played Hudson. 24-21 Good Luck Panthers!

I see it as higher scoring. First one to 38 wins

Looking at scores, I see that Hudson has not scored less than 28 points all year. They are scoring 35 to 45 points, in most of their games
R

Hudson 24-21. Hudson's young but has no real weakness on offense. They get it done late and win a close one.
T

Colder weather should favor Perry. Only slightly but every edge helps. Good luck.

Let it rip Explorers!
I

Perry has the two "fields" advantage - home and Wake. Panthers in a close one.

If by soft you mean soft as steel, rock or titanium then yes they are soft! Lol! My eyes have thrice 3 seen a Hudson team that is soft as nails! I like your prediction though!

Congratulations on your season this year Hudson! May we do battle again next year! You guys have a young team as do we,it just might happen again?

Solid win for the Panthers. Once again, Hudson proved to be a tough out.

Tough ball game. Two well coached teams. Panthers offensive line just made some bigger holes and our backs ran hard. Paltani is a handful! Geesh, their offense is relentless. Nice bounce back season for Hudson.
Perry moves on to play their old nemesis to the west. Go Perry!
C

I expected Hudson D to have a tough time stopping Perry's backs- and they did. Cundiff is a beast. I thought Hudson offense could score more and make it go down to the wire, but the speed of Perry's secondary was a big factor.

A couple plays I thought the Hudson QB was going to break it for long TD runs but couldn't outrun Perry secondary. Also, they closed well on some downfield plays that were open (temporarily). Hudson does not see that type of speed in the Suburban League.

Perry was stronger and controlled the LOS for most of the night. Great effort by a good Hudson team. Just saw some video and Perry looked good.