Can someone give me a little info about the Gilmour team? They gave Ignatius its closest Ohio game 2-1, and over the weekend beat Ed's 3-1. I seem to recall from many years ago that Gilmour had several good players who were on the team during the regular season, but were barred from partipating from the state tourney for some reason. Were they over the age limit? were they boarding at Gilmour? or what? Or am I just thinking of another eastside prep school?
S

They have a terrific goalie. In the three matchups with Ed's this year it went 5-1, 2-2 and 3-1. Both wins were Gilmour's. The 5-1 game was on the road for St. Ed's and flukey as Ed's completely outshot the Lancers by like a 2 to 1 margin. Gilmour controlled most of the second game until Ed's tied it with less than 2 minutes left in the game. I did not see the Cleveland Cup championship.
T

I'm not real clear on just how big the gap between those two teams is. But I can tell you this - not a single player from an Ohio-based team was selected in the last OHL and USHL drafts. The Barons and Blue Jackets AAA teams have had a kid or two selected some years. In the past, I have seen Ohio kids playing for Honey Baked, Little Caesars, and Culver Academy selected.

The Prep team does have 19 year old 'post-graduates' : https://www.eliteprospects.com/team/5380/gilmour-academy?sort=-date-of-birth

A 16 year old playing on that Prep team may have a shot. A 19 year old on that team has aged out of AAA hockey, was not selected for Juniors, and must have parents with waaaaaaaay more $ than sense who just can't let go of the dream.........
A

Ignatius opens up its pursuit of a fifth consecutive title with a 8-0 win over Avon. Next match is on the 25th.
C

Ignatius tops Amherst 9-1 to advance to the district final.
A

Just noticed that Upper Arlington who has been chasing Ignatius in the polls all year was upset by New Albany (whereever that is). Gimour and St. Francis have already clinched their trip to Columbus.
W

Ignatius up 8-0 on the Eagles going into the 3rd period. Always fun to dominate the rival.
A

Ignatius coach must have shwon the team the film of the 2012 district final in which Ignatius was the heavy, heavy favorite, but Ed's won 3-2. BTW, final score today was 9-0 in favor of the good guys.
C

arizonawildcat said:
Just noticed that Upper Arlington who has been chasing Ignatius in the polls all year was upset by New Albany (whereever that is). Gimour and St. Francis have already clinched their trip to Columbus.
Click to expand...

New Albany is located about 15-20 miles northeast of Columbus.

Show some respect: Earlier this year one publication listed New Albany as one of the top 25 cities to live in the United States.
G

Upper Arlington beat New Albany two or three times during the regular season, but lost 3-2 when it mattered most. New Albany is a very wealthy suburb Northeast of Columbus. Their school campus looks like a college campus.
A

Ignatius will win quite easily from what I hear.
C

The Cats will play Gilmour in the semis. The game today was fun until the running clock started.... kidding. The whole game was fun. Have and beating a rival like eds is a lot of fun.

Obviously the two programs have been heading down different paths the past five years or so, but Ed’s still remained somewhat competitive in recent years. I don’t know what transpired today as I wasn’t on hand, but that result doesn’t bode well for the future of Eagle hockey.
A

clevelandcane said:
The Cats will play Gilmour in the semis. The game today was fun until the running clock started.... kidding. The whole game was fun. Have and beating a rival like eds is a lot of fun.

Gilmour gave the Cats one of the toughest games of the year, with Ignatius winning by only one goal, 2-1.
B

Scroll down to the middle video on the wkyc.com article or at the top of Ignatius' sports twitter
start at 1:50 mark 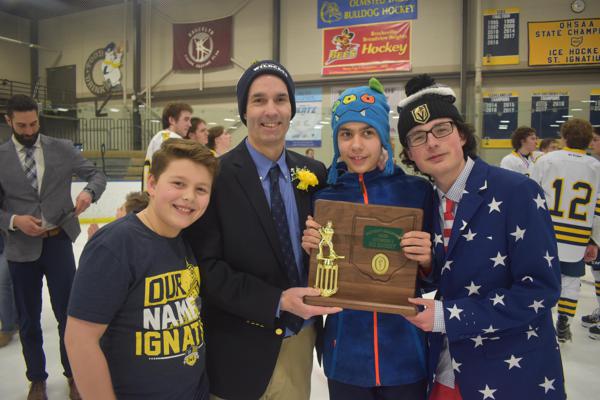 The Wildcats are one of only two schools in the country to have three coaches make the list.

They better play this year. That is all.
S

Just wondering what the St. Ignatius perspective is on the schedule for next season? I know you guys have been more regional the past few years.
C

Any schedule or roster for the Cleveland Wildcat teams?
A