Sawyer Solitaria with the 5 inning shutout


CAMBRIDGE — Regan Rogers, Caleb Bond and Caden Moore all knocked in two runs, as host Cambridge rallied past Union Local for an 11-4 win and improved to 4-0 on Wednesday at Don Coss Field.

The Jets broke up a scoreless game with three runs in the top of the third inning, but the Bobcats answered with four in the home half to take the lead for good.

Davion Bahr scored on a wild pitch to get Cambridge on the board in the third, while Rogers followed with a RBI single, Bond had a RBI groundout and Jake Valentine singled home Rogers to make it 4-3.

Keaton Kyser and Rogers had run-scoring hits to stretch the lead to 7-3 in the fourth; Angelo Rocco hit a RBI single in the fifth; and Bond delivered a RBI single and Moore ripped a two-run double in the sixth to cap the scoring.

Kyser, Rogers, Bond, Moore and Drew Yanico all had two hits for the Bobcats, who had 13 hits. 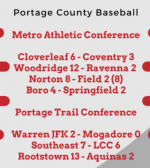