Sunuvaditchdigger said:
And, a mirror image ...

And another one three days later:

Haven't been on the hoop forum in a while, but Tyirq Ivory of Warren G. Harding has scored 25 or more in six games thus far...

The ECC has had multiple 25+ point performances this year. Tyler McKinley, Brady Hardewig, Luke Sanders, and Jermaine Matthews have all hit that mark at least once. Crazy thing is none of them are seniors. League is going to be good for a while in terms of top talent.

Noah Rich, Franklin had 30 against Thurgood Marshall and 32 against Monroe last 2 weeks
S

Both guys average 25 ppg or higher. 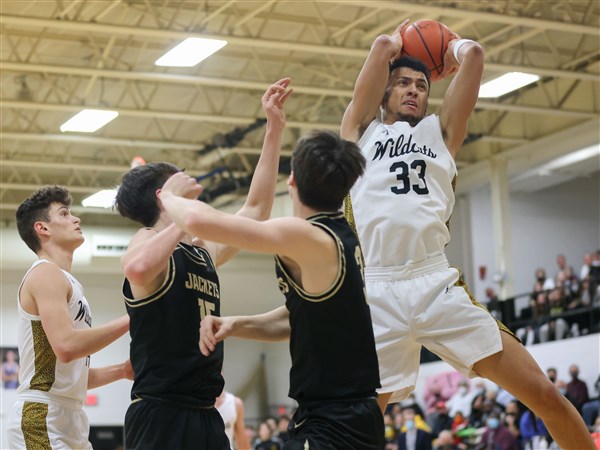 Just eight days remain in the 2021-22 boys high school basketball season, and with league championship chases taking center stage next week before the ...

Sean Craig, Northview: Once again the area's most productive and dominant player, the 6-foot-7 senior fourth-year starter has only added to his career legacy this season in leading Northview to a 17-1 overall record and a first-place 10-0 mark in the Northern Lakes League. Craig, who has signed to play at Division II Indianapolis, is averaging 28.4 points, 14.2 rebounds, and 4.4 assists per game while shooting 63 percent (174-of-280) inside the arc, 35 percent (16-of-46) on 3-pointers, and 75 percent (115-of-154) at the foul line. He has 24 steals, 18 blocks and just 25 turnovers this season, with single-game highs of 42 points and 21 rebounds. Craig has produced 61 career scoring-rebounding double-doubles in 93 games, and owns Northview career records with 1,673 points and 1,030 rebounds, while playing on Wildcat teams that have gone 76-17 overall (37-8 in NLL). Craig was named second team All-Ohio in Division I as a sophomore, and was chosen to the D-I first team last season.

Jerry Easter II, Emmanuel Christian: The 6-5 freshman arrived as advertised and a superb all-around talent, but unfortunately had his first prep season shortened to just 14 games after sustained a broken wrist. At that point, Easter was averaging 25.0 points and 10.2 rebounds a game while leading the Warriors to an 11-2 start as the team's chief ball-handler and distributor at point guard.
You must log in or register to reply here.
Share:
Twitter Reddit Pinterest Tumblr Email Share Link
.
Top