From the article:
"Other Buckeyes to win include offensive tackle John Hicks (1973), linebacker Chris Spielman (1987)"

The Tigers ended the season at 6-2.

Last Game of the Season

The Future is once again bright for the Tigers!!

Tigers84 said:
The Future is once again bright for the Tigers!!
Click to expand...

What kind of goof laughs at this statement?

Wonder if all entire freshman team will be brought up once the playoffs start or just a handful? Early round games would be a great opportunity to get some of these kids some varsity PT.

Will there be tickets at the gate?

To the varsity game

Obie3621 said:
Will there be tickets at the gate?
Click to expand...

According to the McKinley ticket office, there will be tickets sold at the gate. Credit card purchase only.

John Lee Pettimore said:
Wonder if all entire freshman team will be brought up once the playoffs start or just a handful? Early round games would be a great opportunity to get some of these kids some varsity PT.
Click to expand...

I would certainly think some would, a few could help us Saturday, but yes early round playoff games and practices will help development moving forward.

Chris Spielman thought he was reading about another Lions great being honored.

Is there a place to watch on the net?

It’s incredible that our opponents have thrown the ball 130 more times then we have.
But I believe that stat is combination of the Tiger weakness on D and the stat of rush D in the post above.

Coach Moore has scheduled another game on Saturday:

Go to the Tiger Booster Club website. The updated numbers are listed there. Here it is——massillontigers.com
P 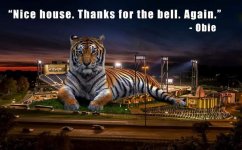 Massillon's down to their 3rd string RB, woe is us....right? Wrong. All Freddie Lenix Jr. has done is rush for 247 yards and 4 touchdowns on 29 carries for an 8.5 ypc average. It looks like Hartson isn't coming back anytime soon and putting Lenix in the backfield not only keeps Beasley fresh to play LB, it adds an element of speed that you just don't get with Beasley.

This line is starting to gel at the right time. Earlier in the year coach Moore started moving some players around between the Oline and the Dline creating some depth and making some kids interchangeable. They dominated McKinley's Dline and opened some big holes for Lenix and McElroy. Staying healthy for this line will be important moving forward.

Looks like we found another weapon. When McElroy was replaced by Slaughter early in the year, many wondered where/how he could help this team win. You couldn't really play him anywhere else, if he were to get injured, you would lose your only viable backup. Now with him essentially running the wildcat as an added element he can also throw the ball. (Had a TD pass called back vs McKinley.)

This linebacking Corp has really stepped up their game. Depuy has led the way, in the last 2 games he has 5 solo, 5 assisted, 4 tfl's, has recovered 2 fumbles and has a sack. Not knowing if Beasley will play this week is a little easier with the progress sophomore Maverick Clark has shown. Against McKinley Clark registered 5 total tackles and 2 tfl's.

This line is a big reason Massillon is so hard to run the ball against. Statistically not overwhelming but they free up our LB's to make tackles and despite what I consider to be a down year in the secondary, this line does get pressure on QB's. The addition of Woods to the DL midway through the season adds not only depth but another big body that makes it tough to run on. Moving Kirksey from LB to DT has added an element of speed to the line.

Good luck to Massillon this evening from the Benedictine Bengals!
D

RestoreTheRoar said:
Good luck to Massillon this evening from the Benedictine Bengals!
Click to expand...

Thanks ! Same to you guys