Marietta and Barnesville dropped out, leaving 4 teams. Tournament was also moved from Zanesville to Marietta after two consecutive days of rainouts, and finally got underway July 18.

Beverly-Lowell broke a 3-3 tie with a run in the top of the seventh to slip past Post 84 by a 4-3 final margin.

But for Cambridge, the story of the night was missed scoring opportunities as Post 84 stranded a whopping total of 12 runners in scoring position in the tough loss. Including leaving the bases loaded in both the second and fourth innings and failing to score.

"We had our chances tonight," veteran Cambridge manager Ron Antill offered. "We had some many runners in scoring position with less then two outs and could not move them. It's tough to win a game when you fail to execute that many times."

Despite the scoring struggles, Cambridge managed to stay close thanks to the solid efforts of ace hurler Jake Valentine who kept his squad within striking distance.

"Jake was just lights out again," Antill added. "But same old story, we just don't give him any run support. But you won't see a better pitched game than that the rest of the tournament than what Jake pitched tonight."

Beverly-Lowell took a first inning 1-0 lead off Valentine, with Jude Huffman stroking an RBI single to score Seth Dennis who led off the game with a double.

Cambridge finally pulled even in the third with a run off Beverly-Lowell starter Seth Dennis. Blade Barclay ripped a lead-off triple to jumpstart Post 84, with Caleb Bond socking an deep fly ball to center field that brought Barclay home to deadlock the game at 1-1.

Beverly-Lowell quickly responded in the top of the fourth with a pair of runs to retake the lead at 3-1. Owen Brown collected an RBI base hit and Dennis aided his own cause with an RBI double.

Cambridge was again able to pull even, this time at 3-3 with a pair of scores in the bottom of the sixth. Bond picked up his second RBI of the game with a single, while Caleb Campbell scored on a wild pitch after reaching with a base on balls.

But that set the stage for Beverly-Lowell's game deciding run in the top of the seventh. Cambridge was able to again get a pair of runners on base in the bottom of the seventh.

Gates Thompson ripped hard shot down the right field line that was hauled in by Jacob Huffman to end the game to send Post 84 to a 15-15 mark on the season.

Cambridge racked up 10 hits in the game with Bale Brumfield leading the way with a 3-for-4 night with three singles, Drew Yanio doubled and singled. Valentine banged out a pair of base hits with Barclay checking in with a triple and Campbell stroking a double.

"I really don't like losing to that team," Antill said. "Before the game everybody on the Beverly-Lowell side was saying how we don't deserve to be on the field with them...we have no shot. That's what makes it so frustrating, we had all those chances. f we just come through one time it's a different story." 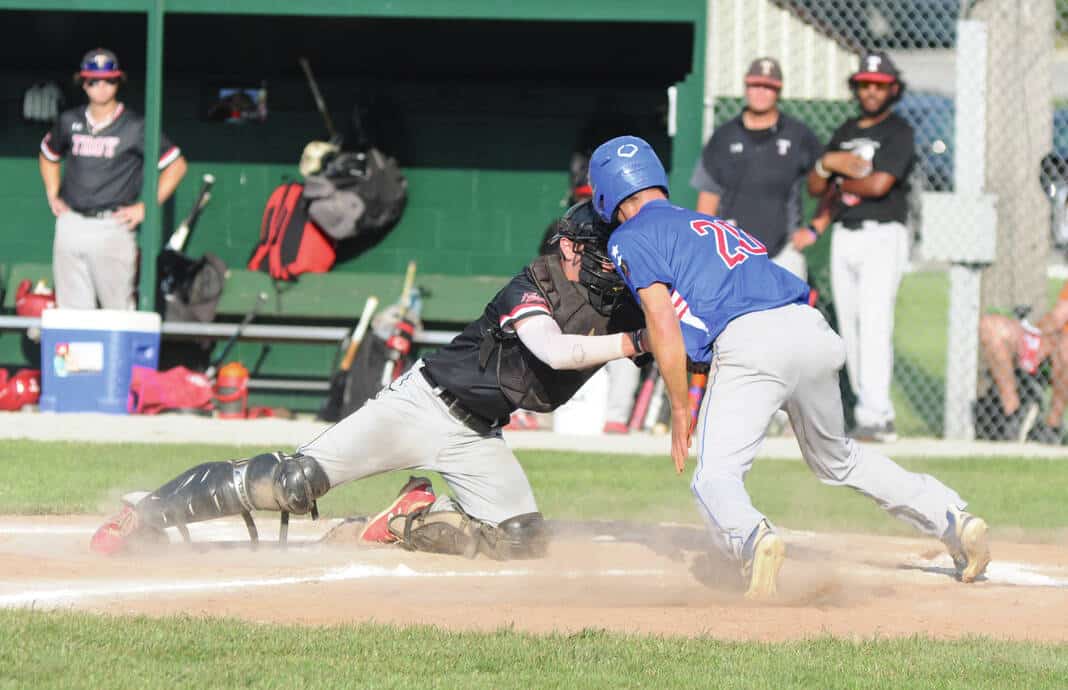 SIDNEY — The Troy Post 43 Legends will head to Youngstown this weekend for the NABF World Series.

SECLMW's latest (Unofficial!) - notes - no guarantee I got it all correct, but I tried!