Good luck to our Riders, I think this is the first time playing this team

2 hour drive for this one
C

Long drive indeed. Who is the qb? Freshman or Senior?
W

I think West Jeff wins this one 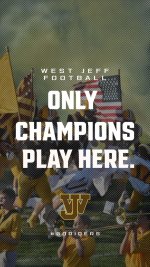 cavfalcon7377 said:
Long drive indeed. Who is the qb? Freshman or Senior?
Click to expand...

The freshman QB has been out for a few weeks now so, they are using the backup senior QB with a cast on his none throwing hand.
W

Newcomerstown Trojans- The north champs from the Inter Valley Conference.
I believe the 1st year that they have made the playoffs and coach Dirk Gadd have them playing good football right now.
On offense, they run the wishbone and they run it really well.
Not a big team but are well coached, disciplined and block to the whistle.
Only about 25 kids on the team but don't seem like that has any effect on their stamina at all.
They are a very young team with a lot of 9th and 10th graders that start.
10th grade class seems to be their best class from talks.
The offense will put you a sleep running the ball 9-10 times in a row and then play action and throw it deep and burn you like crazy.
On defense, the Trojans run a 3-3-5 which they have giving up a lot of points this season but are really quick to get after the QB.
They beat a really good Malvern team 2 weeks ago by outscoring them.
Their offense looks hard to stop, lots of mis-direction plays, counters and sweeps you got to keep your eyes on the ball.
And, they don't make a lot of mistakes and penalties!
I believe that their FG kicker is still out and the Trojans go for 2 after each TD.


This is the 1st meeting between the teams and as young as both teams are, probably not the last.

For WJ, it's playoff time!
The Riders are expected here every year but this is not a normal year.
This year is much different at 4-6, last place in the league and on the road for the playoffs.
A lot of kids hurt and have been out for most of the season.
The freshman QB was on his way to a record season when he went down with a season ending knee injury on the 1st drive of week 6.
So, he only played in 4 1/2 games this season and went 109 for 165 for 1,547 (66.1) & 16 TD's & 5 INT's.
WJ's best class right now might be their 10th grades as well but the future really does look great for the Riders at this point.
This season has turned into a building year for the younger kids at WJ and all the younger boys have got a lot of playing time due to injuries which will only help them next season.

This should be a good football game.
The weather will not be an issue and both teams will score points.
Will it come down to who has the ball last or who makes a big play or who comes up with a big turnover?

great win for WJ after a disappointing regular season. enjoy your trip to the ohio river next week.
R

ghsknightsfan said:
great win for WJ after a disappointing regular season. enjoy your trip to the ohio river next week.
Click to expand...

Thanks buddy, just a 2 hour and 30 minute drive lol
T

Wow, I was wrong!
What a different team from top to bottom even coaching. WJ is getting healthy and it showed with Buescher back and a few others.
Looked like the WJ D of old and things just seemed to click for WJ.
They were able to score off of turnovers tonight and stop a really good run team.
I’ll have more later, but WJ will face a better run team next week in Dawson Bryant.
Still some things to work on!
G

Other than the QB who returned in week 11 ?
W

Great Day said:
Other than the QB who returned in week 11 ?
Click to expand...

Great Day said:
Other than the QB who returned in week 11 ?
Click to expand...

I understand not putting HS kids names out there but is there positions or #s you could use to be a little more specific. They must have been some big losses during the year to affect the the season in such a large way. Definitely not a typical year for WJ football.