Was 50/50 before season but Euclid has not looked as impressive as I thought. Taking the Bulldogs, good luck also.
J

The winner of this game will widely be considered to be the #4 team in Region 1. The winner should also get big computer points, greatly increasing their chances of hosting in Week 11. Euclid got a win over Glenville in Week 1, but it wasn't pretty. Last week they scored a ton on Canisius (NY), but not sure what to think of that team. McKinley has beaten WGH and Buchtel, a couple of teams that made the playoffs last season.

I think this will be a good matchup, but I slightly favor Euclid. They have an experienced QB and RB along with at least one dynamic playmaker at receiver. McKinley has a good RB too. I think the game will be on the higher scoring end, with both teams in the 30's or 40's.

Along with Solon/Stow, this is a big "show me" among Region 1 teams this week.
S

I pick THE PUPS in a squeaker - what other choice is there really?
Go PUPS! Beat Euclid. Good luck to all, including 7 more weeks for our friends "8 miles to the WEST" !

Benny took on Euclid in the 1st scrimmage and actually fared well against them. Since it was the first scrimmage it was mostly basics stuff but those that were there were underwhelmed by the Panthers line play. Don't forget you have the Rotsky sheet show in play when things get close or something out of the ordinary happens and things can go sideways quickly when he is coaching screaming on the field of play.
C

I'll take Euclid. They usually get up for games like these.

Euclid has an advantage in having an established coach,system,and QB in play.Canton has a lot of adjustments and tinkering to do with coaching and rosters because of the new staff.Big advantage Panthers.Euclid is very athletic and scores in bunches but they play sloppy at times commiting untimely penalties.Like unsportsmanlike conduct on a long TD play.Canton is at home.Euclid is young at some positions.I could see this being a shootout.Euclid can pass all night long if the Dogs are good at stopping the run.Euclid can run the rock with multiple players.I would pick Euclid at home or on a neutral field.At Benson I think McKinley is a slight favorite.First team to 40 wins.

I don't know who might be out for us this week, so I can't really pick us and I haven't seen Euclid this year, so I can't honestly say what they'll likely do, either. I would like to think we will defend our house with whoever shows up ! Therefore, McKinley by 1.


WHERE CHAMPIONS ARE MADE AND SUCCESS IS TRADITION

Bulldogs by a TD at home.

This is IUDOGS signing off.
C

Nice article on the McKinley-Euclid game. 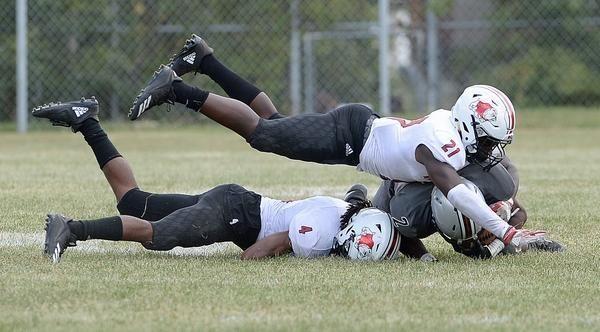 McKinley looks to clean up act with Euclid next

Still-learning Bulldogs have not allowed mistakes get in the way of winning ballgames.

Most of your picks will make you look like fools on Saturday morning,it's McKinley football just enjoy the game and hope the Home team wins...BAM!

McKinley looks to clean up act with Euclid next

Still-learning Bulldogs have not allowed mistakes get in the way of winning ballgames.

This article shows me that McKinley really struggles passing the ball and a lot of turnovers for just two games.Do anything like that and Euclid will blow them off the field.But who knows? Their all just kids. Go Panthers! Good sportsmanship and no injuries

GameDay Bulldogs,this is why you play this sport,at home in front of all your fans against a very good team,just do your best and enjoy the moment...BAM!...GO BULLDOGS!
C

Raymo said:
GameDay Bulldogs,this is why you play this sport,at home in front of all your fans against a very good team,just do your best and enjoy the moment...BAM!...GO BULLDOGS!
Click to expand...

Raymo your getting ahead of yourself.WHAM!!

How many yards will our 1st team all-state RB rush for against Euclid?

Garrett has rushed for 375 yards after the first two weeks.
C 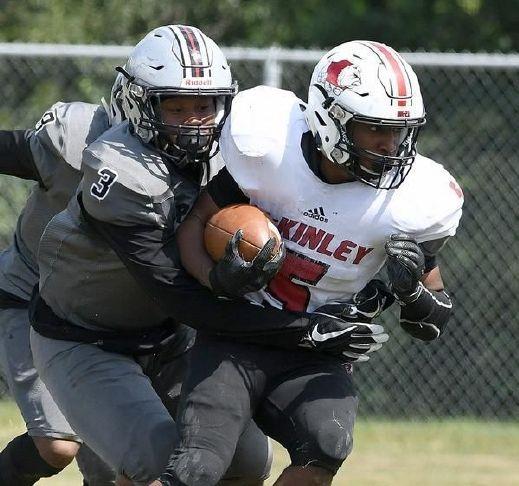 Score of the freshmen game?

A preview from a paper in the Euclid coverage area:

I know that a Buchtel player had four interceptions against McKinley in Week 2. Euclid has a big time playmaker (Atiba Fitz) that makes an impact in all three aspects. He had three picks last week. That is something to watch out for. Maybe McKinley can get away with a few sloppy turnovers against Buchtel. But that won't fly against Euclid. The Panthers should roll if they can force 3-4 turnovers.
Last edited: Sep 13, 2019
S

Good luck to all. GO PUPS! sam
Click to expand...

Thanks for posting this Sam.You lucky dog getting to watch our Bulldogs in person.

McKinley received to start the game, pickup up a few first downs and was forced to punt. Euclid scored on a 4 play drive to make it 7-0.

McKinley picked up several first downs and has a 3rd and 2 at the Euclid 31....favorable spot gives them the first down at the 29. QB keeper to the 23, pass broken up in the endzone, Garrett for only 2 makes it 4th and 3 from the 22. McKinley to go for it....pass is incomplete (dropped).

Pass complete to Black at the Euclid 18 for a first down. Garrett for a gain of 2...flag on the play and they never said what it was....QB keeper to the 6 for a first and goal. Hi snap...Garrett for no gain, Garrett dropped for a short loss, 3rd and goal....off sides call moves the ball to the 5...pass complete to Robinson for a TD. Extra point is good.