But fans aren’t showing up the way they used to. Average attendance in 2018 was the lowest it’s been for Florida since 1990. While the ’19 season saw an uptick of about 2,000 fans per game—for an average of 84,684 in a 91,916-capacity stadium—attendance has still fallen nearly 6% over five years.

Florida isn’t alone—and plenty other schools have it much worse. From 2014 to ’18, attendance across the FBS fell by 7.6%. Last year, on average, 41,856 fans went to games. That’s the lowest turnout since 1996; even major programs like Ohio State, Virginia Tech and Ole Miss suffered declines of greater than 5%. The NCAA has yet to release its full report on 2019’s numbers, but pictures of nearly-empty stadiums, from big to small programs, popped up every fall weekend on Twitter. During bowl season, as games moved to neutral sites, the stands were so empty it looked more like spring football. Even athletic directors will openly admit it: College football is facing an attendance crisis.
Click to expand... 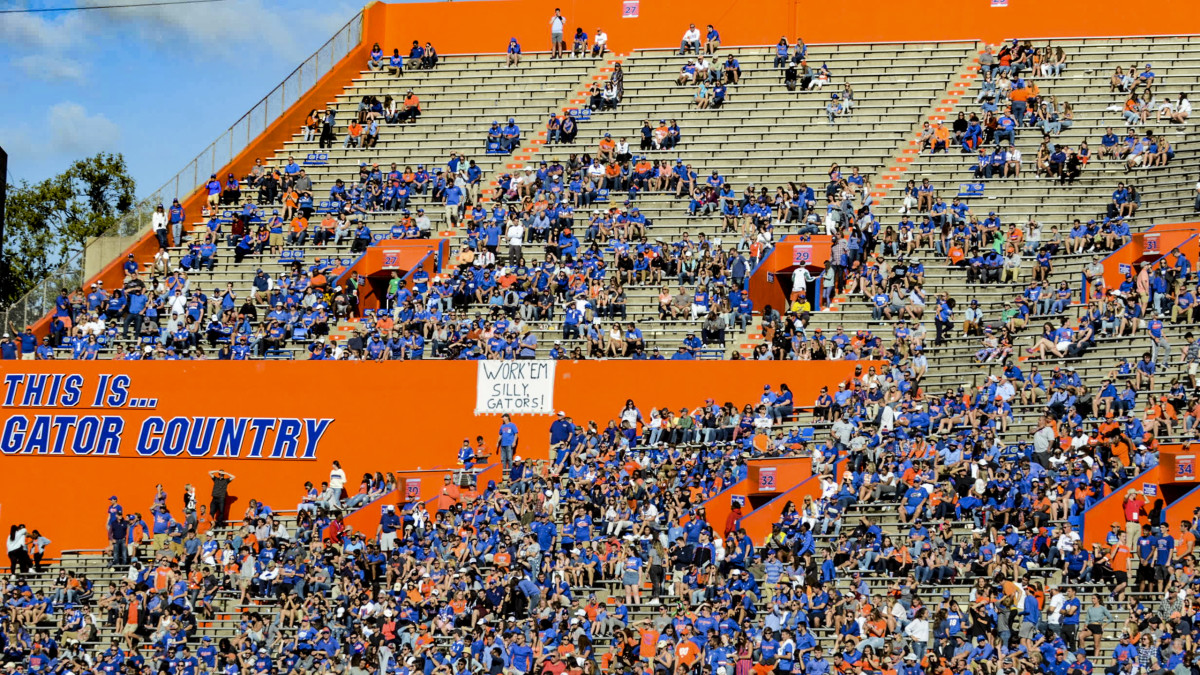 Why Is College Football Attendance Tanking?

To get to the heart of the problem, we set out on a journey across the sport's landscape.

Price and the slow death of sports all-together

I went to the Ohio State/Maryland game this year. Was shocked at how long the TV timeouts were. What made it even more frustrating was each time a player limped off the field, they used an injury timeout to show more commercials. Might have taken an extra 15 seconds for him to get off the field, now they have to show 3 minutes of commercials.
Last edited: Jan 12, 2020
E

Watching on tv is superior.

eastside_purple said:
Watching on tv is superior.
Click to expand...

Are the commercials shorter on TV as opposed to being at the game?

zeeman said:
Are the commercials shorter on TV as opposed to being at the game?
Click to expand...

Nope but you can put on another game during the down time or better yet DVR it and start 60 minutes later and not worry about commercials until the second half.

I can also use the bathroom in about 2 minutes at my house vs. the 10 minutes at Ohio Stadium. Beer isn't $9/cup at home and most importantly I don't have to deal with moron fans trying to inch me out of my seats while cussing the entire game because every offensive play by Ohio State did not result in a touchdown.
E

zeeman said:
Are the commercials shorter on TV as opposed to being at the game?
Click to expand...

My understanding is that TV ratings are up big time for both the NFL & College football yet in stadium attendance has declined in both. When you look at the actual numbers involved (TV eyeballs versus butts in seat) the conclusions are that:

* football is more popular then ever

Of course you don't need to be a rocket scientist to see why: commercial breaks/replays slow the game to a crawl in the stadium; it's damn expensive to attend; it's uncomfortable (lines for food/lines for bathrooms/seats/people on top of you); the drive in and the drive out suck; can't see the game as well as on TV.

The real wonder is that so many people still go. The rigors of the in stadium experience mean that older people avoid it and folks with young kids avoid it. The cost rules out a big part of the target audience as well.

Speaking for myself, I love watching in stadium football but I restrict this to high school games which avoid a lot of the negatives of the college & pro game. Not to long ago I went to 3 - 4 pro games (Bengals & Bills) and 2 - 3 college games (Ohio State & UC) EVERY year. Now, not so much.
U

eastside_purple said:
Watching on tv is superior.
Click to expand...

My pushing 80 (September) bones aren't up to extended hours sitting outside any more. TV is much better.
I

Combine every post in this thread and there is your answer. Spot on across the board.