Where will the state tourney be next year?
A

Not determined yet
C

Saw an article in the paper that UD wants to keep them but does not currently have an agreement with the OHSAA.

Great venue, but not central located. Much like canton for football.
W

Girls have a deal with UD and I would bet the boys will soon follow. The crowds will be tremendous as Dayton is a basketball city and more importantly UD wants the games unlike OSU.
E

I would expect that it will be at Dayton for the foreseeable future. As stated above, Ohio State really doesn't care very much anymore about hosting tournaments.
M

NCAA play-in games for 2022 are scheduled for Dayton on 3/15 and 3/16. So if the OHSAA wants to be in Dayton, I'm guessing they would have to hold the State tourney on Fri/Sat/Sun again?
C

The article lays out the girls tourney being Thurs-Sat, The First Four Tues-Wed, and the boys Fri-Sun.
6

For the record, the OHSAA wants to have the games on Friday-Sunday.
S

I enjoyed the Fri-Sun format.
E

CedarBuck92 said:
The article lays out the girls tourney being Thurs-Sat, The First Four Tues-Wed, and the boys Fri-Sun.
Click to expand...

Where is the article?
C

Ericles said:
Where is the article?
Click to expand...

When the Ohio High School Athletic Association needed a venue for this year’s boys basketball state tournament, it found a home at UD Arena. The OHSAA does not have an agreement in place for next year’s tournament.

Scott DeBolt, the executive director at UD Arena, wants to be the new home for the tournament. UD Arena also hosted the girls tournament this year and has a contract to host it the next two years.

ExploreWhat's next for Centerville after winning first state title
“I would love in the next 30 to 60 days to have something wrapped up for at least next year if not a long-term agreement to stay here,” DeBolt said Sunday when the state championship games were being played.

The Schottenstein Center at Ohio State has been synonymous with the boys state tournament since 1999. The tournament moved to Dayton this year because Ohio State would not allow outside groups to hold events with fans. The only other time it was played at UD was in 1986 and 1987. Dunbar won its first of five state titles at UD in ’87.
“We’re going to go somewhere where we can have fans,” said Tim Stried, senior director of communications for the OHSAA. “It can be a high school. We’re not going to play high school sports without at least families.” 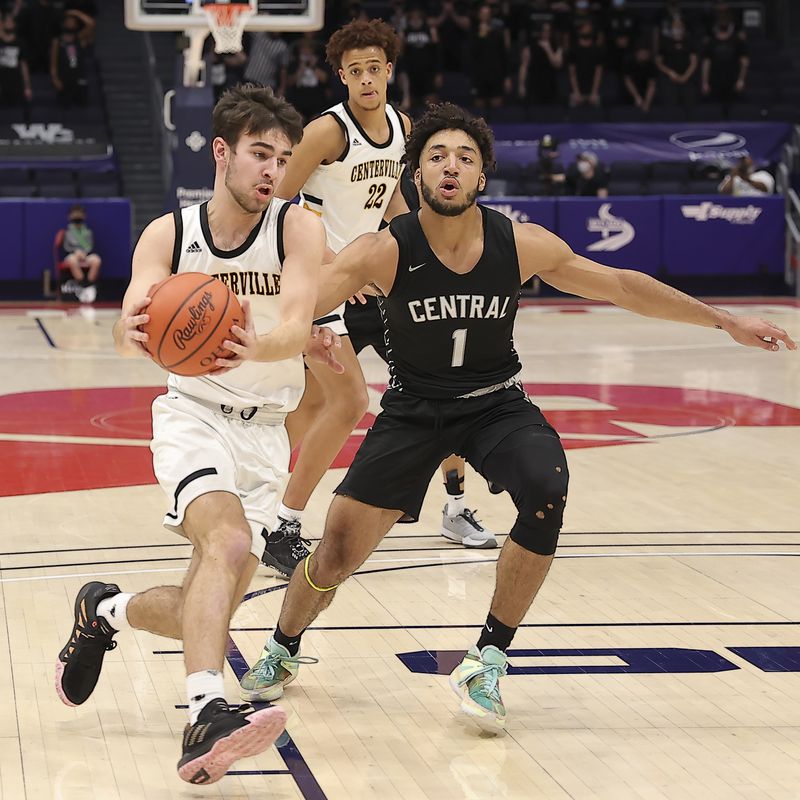 Montgomery County approved up to 25% capacity or about 3,300 fans, but UD couldn’t go quite that high and guarantee approved social distancing guidelines. The capacity for each of the 12 games from Friday through Sunday was 1,770. Fans were spread throughout the arena.
“We’re really excited that we had this opportunity,” DeBolt said. “We jumped at it, and it’s been great. Obviously, we do basketball well here and that’s what we like to do.”


Stried said the biggest considerations for the OHSAA when choosing state tournament sites are availability and expenses. Because UD Arena is a smaller venue the cost is less, but the determining factor could be availability.
ExplorePHOTOS: Centerville wins Division I state title
Ohio State always has potential conflicts with postseason men’s hockey and women’s basketball. In the past, Ohio State teams have played elsewhere to accommodate the state basketball tournament, but athletic director Gene Smith has told the OHSAA they want their teams playing at home from now on.
“They’re right,” Stried said. “So, we don’t have very many available dates for the Schottenstein Center. That’s the biggest puzzle piece.”
UD Arena will go back to hosting the NCAA First Four next year. If they add the boys tournament, that will mean girls state on Thursday, Friday, Saturday followed by the First Four games on Tuesday and Wednesday the next week, then boys state on Friday, Saturday and Sunday.
“It fits right in our wheelhouse in the middle of March and creating a little March madness of our own,” DeBolt said.
Stried said UD has been expressing interest in hosting both basketball tournaments for a few years.
“If you get a venue that works financially, it works on the schedule with the dates, and they really want to host it, you’ve got a potential really good partner,” Stried said of UD. “I like both venues. This one is just more of a basketball arena. I think anyone would tell you that.” 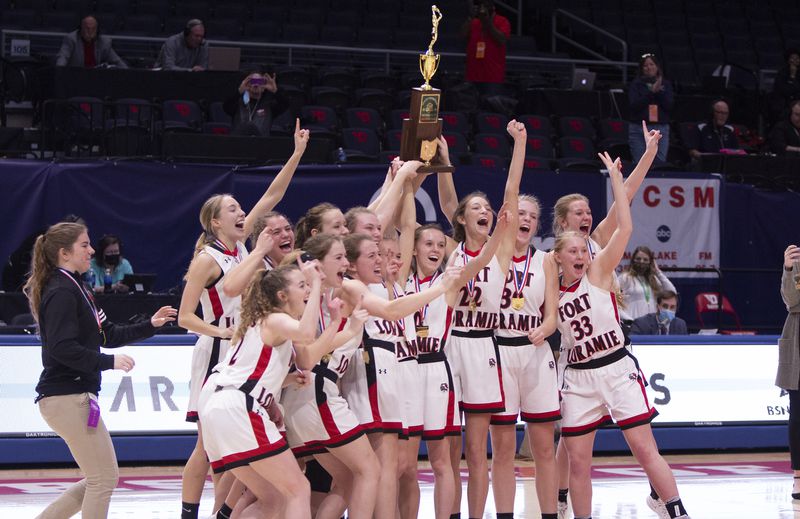 The Schott is multipurpose and seats a little over 18,000 for basketball, while UD in its First Four configuration is around 13,000. Fans are closer to the court at UD with better sight lines in the lower seating. Average game attendance at the Schott has been 11,000, Stried said. LeBron James and Akron St. Vincent-St. Mary brought the only sellout crowds. The state games at UD in the 1980s all drew more than 11,000 fans, including several over 13,000.
“If the boys state tournament was here,” Stried said of UD, “I think you would have a ticket effect like what we used to have at St. John Arena. If it’s a big game, that game might sell out because it becomes a hot ticket.
ExploreBotkins claims first state basketball championship
“It didn’t happen at the Schott because you always knew you could get a ticket. There was not an urgency to get a ticket, and then people wouldn’t go, and we’d have smaller crowds. If you can have a sellout, it’s awesome.”
Stried and DeBolt both said they received only positive feedback from fans, players, coaches and administrators.
“Even the schools that came down from Cleveland, they had a great experience here,” Stried said. “It’s just such a great basketball arena. It’s built for basketball, and everything, from there’s not a bad seat in the house to the proximity of the locker rooms to the court, the way the staff here welcomes us, it’s just been a great experience.”
Coaches were often asked in postgame interview sessions about playing in Dayton and had similar responses to what Columbus St. Francis DeSales coach Pat Murphy said.
“We don’t care,” he said. “We’ll play anywhere. We love UD Arena, we love the Schott. Trent Arena’s beautiful. We’ll play anywhere, but we’re really grateful to be here.”
T

JElder said:
Girls have a deal with UD and I would bet the boys will soon follow. The crowds will be tremendous as Dayton is a basketball city and more importantly UD wants the games unlike OSU.
Click to expand...

True, but crowds in Columbus are great as well. I vote move it back to St. John Arena. Great atmosphere. State hasn’t been the same since it was moved to the Schottenstein.
D

Another vote for St. John here. OSU loves money more than anything. They agreed to keep the arena up after the public outcry to tearing it down. Let's give them their signature event(s). Move both high school tourneys there, the Schott is open for any potential hockey/bball games (which are rare but oh well), and it's still centrally located.
L