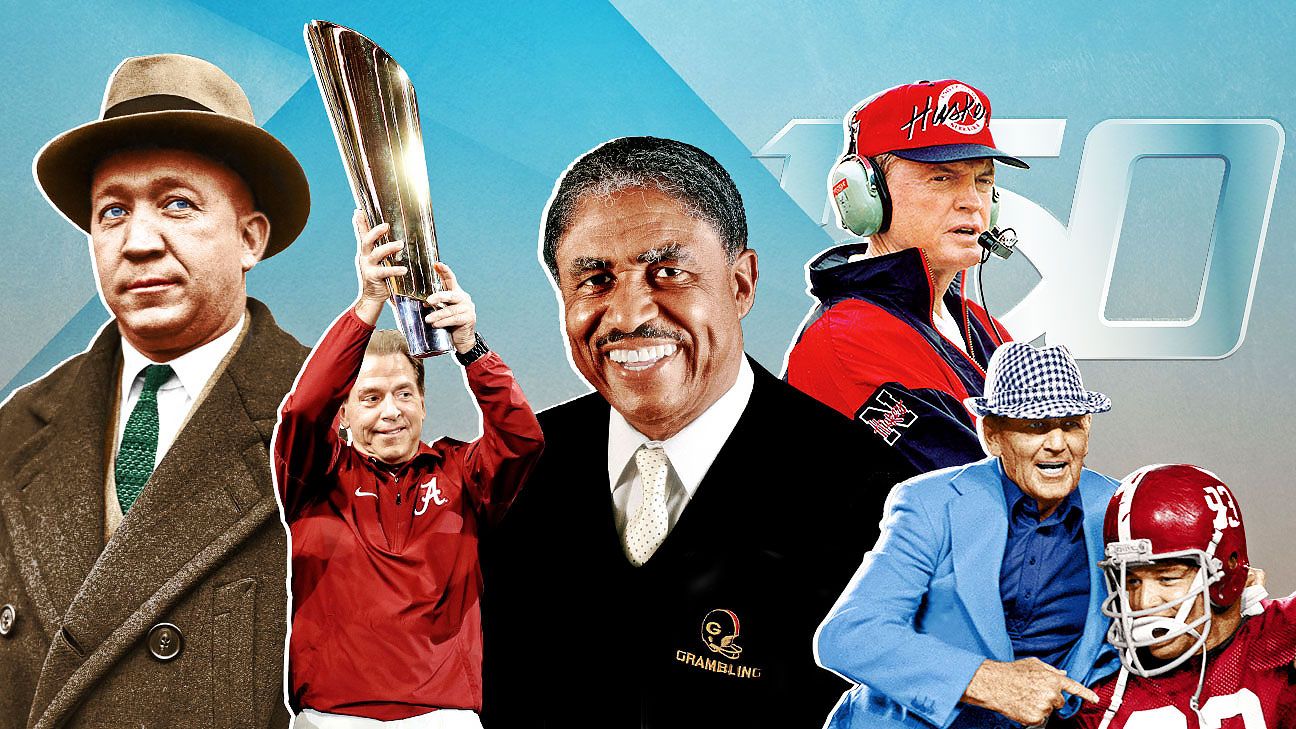 A blue-ribbon panel of 150 experts selects the best coaches in the sport's history.

OK I am not one that cries about ESPN bias but there is a huge problem if you have Urban Meyer at 46 when he has 3 National titles and a .854 winning %, 3rd all time. He basically has the same record and # of Natties as Barry Switzer who sits at 13. Incredible.

Agree, and I'm not sure why Paterno would be ahead of Woody.

Auggie, that's funny, I was just coming here to post the exact same thing. It's an absolute joke that Meyer is at 46. I grew increasingly incredulous as I scrolled down the list seeing names like Frank Beamer, Dabo Swinney, and Bob Stoops before Meyer's name came up. Eventually I may have started laughing as I got to 40 and he still wasn't there.

And then when you finally get to Meyer the first line of his description goes:

"Meyer's coaching career was cut short by health concerns and his teams were sometimes plagued by off-field problems ..."

That's some of the most blatant bias I've seen from those guys (ESPN) in a while. They must be pissed he is kicking as$ at Fox
K

Even Tressel and Pete Carroll were ranked in front of him.

3 national titles, 3rd highest winning percentage of any coach ALL TIME, and two undefeated seasons IN ADDITION to his national title seasons

I'm not an OSU fan or even a Meyer fan for that matter but having him at 46 is a straight up joke. He is better than most in the top 10 IMO.

Right now he’s basically known for not playing Joe Burrow, having a dude murder someone while on his team, and faking health issues.
I

Yeah, that is what he is known for. Basically.

irish_buffalo said:
Yeah, that is what he is known for. Basically.
Click to expand...

Basically people view him as a POS. Give it a few years and he will jump into the top 20
N

Small university - but - this is impressive?

28. Larry Kehres, 332-24-3
Mount Union (1986-2012)
In 27 seasons at Mount Union, Kehres' teams stockpiled 11 Division III national titles, 21 unbeaten regular seasons and 23 conference championships. His teams had winning streaks of 54 and 55 games. His .929 winning percentage is the best among any coach at any NCAA level.

Hammerdrill said:
Agree, and I'm not sure why Paterno would be ahead of Woody.
Click to expand...

Why would he have started Burrow over Haskins? Take a look at their stats from the 2018 season. Burrow grew a lot from his 2018 season to 2019. I do not hold it against him for leaving OSU for a starting shot at LSU. It was the right move for him. He was able to start right away. Meanwhile, Haskins set records for OSU in 2018 and Burrow's legendary 2019 was hardly missed at OSU due to Fields' fantastic season. It was a win for everyone.
G