Yesterday afternoon, I changed my plans on heading to Akron to catch a noon game and opted to head to Weirton, WV, for the first time to catch a game between Madonna and Van, at Weir high school. I have to say I was very impressed by the stadium, especially with the steep seating on the home side.
Gavin Dietrich from Madonna scored the game’s first points on a two yard QB keeper . A Bad snap led to the point after attempt failing leaving this a 6-0 score, with A little under 4:00 minutes in the opening quarter. 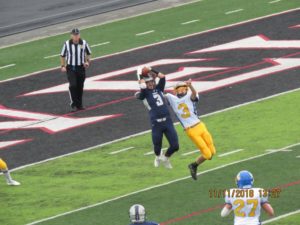 What a catch
Van would methodically work the ball down to the Madonna one yard line, where David Stewart followed some nice work from his offensive line to get into the end zone and tying this one up at six. The point after kick was blocked, leaving this game tied at six, with 1;54 left in the opening quarter.
Dietrich would score again, when he hauled in a twenty two yard pass, with a little over 8:00 left in the half. Dietrich was stopped on the two point try again, leaving this a 12-6 game. Dietrich was showing the tiny crowd just how much of a gamer he was early in this one.
On the ensuing kickoff David Stewart fielded the ball on his own twenty one and took off,on what would be a fine seventy three yard kickoff return for a Van score.Drew Price was stopped on the two point run, leaving this game locked at twelve. 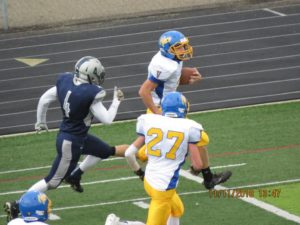 You can’t catch me
Van used a fifty yard reception to set up their next score, that was made by Stewart and then Jarod Puckett caught the two point conversion pass, making this a 20-12 game.
The final score of the contest came on a Price eight yard run where he plowed his way in for the score,making this a 26-12 game.
Van now stands 6-0, while Madonna falls to 3-4. 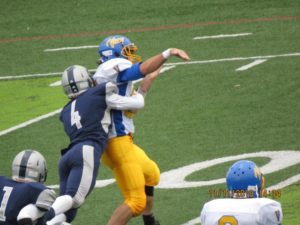